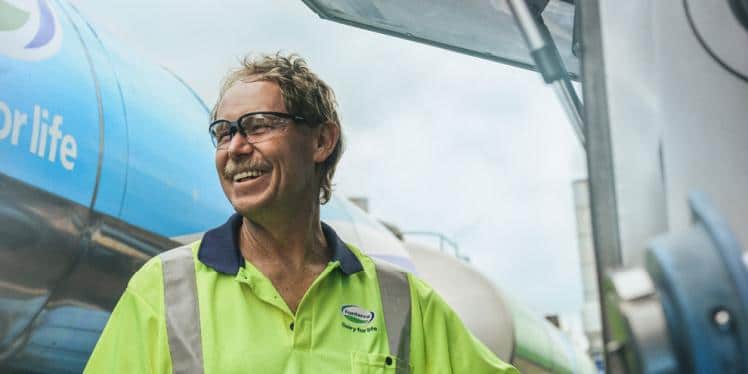 Fonterra’s milk tanker drivers spend many hours working alone at all times of the day, and are often the only Fonterra employees farmer shareholders will see on a day-to-day basis.

The global dairy co-operative’s Health and Wellbeing Manager for New Zealand's sites, Terry Buckingham, says their drivers reported they wanted some support to better manage their mental wellbeing, and wanted to be able to have better conversations about wellbeing with farmers.

“Unfortunately, our drivers are facing some situations where they have come across people in distress. Just recently one of our drivers noticed someone sitting on the edge of a cliff.  He called the police and kept them talking until emergency services arrived.

“So we wanted to give them tools to have healthy conversations and strategies for supporting others.”

Terry met with Dana Carver from DairyNZ, which had – with WellSouth – created GoodYarn, a collaborative mental health literacy programme that was initially aimed at the rural sector. Terry knew GoodYarn would be perfect for Fonterra’s workforce. So he started with the milk tanker drivers back in 2017, putting them through GoodYarn workshops.

“GoodYarn has been getting some great success. The feedback shows it's very practical, easy to understand and uses realistic scenarios that are suitable for our people. It gives them strategies they can use and things they can say, as well as ideas for where they can refer people to for support.

“It’s aimed at helping anyone talk about mental health; whether about their own or the people they have contact with. It’s about creating an environment where our people spend more time talking and having meaningful conversations with each other and their families.”

The GoodYarn workshops were initially delivered to all Fonterra's 1600 drivers. “Our evaluations showed an 80% satisfaction rate, which is a good response,” says Terry.

“From that we’ve seen a real shift in how people regard talking about mental health and mental distress. Coming into the workshops they seemed a bit hesitant, but coming out they said they felt quite confident in having a supportive conversation with someone.”

Terry says managers are deliberately mixed into the workshops. “People leave their job titles at the door. We’re here to talk about mental health and that affects everyone equally.

“Among the team there’s now a greater awareness of pressure, workloads, stressors and other determinants of mental health. They also know how to manage that by using simple tools such as the Five Ways to Wellbeing.”

Based on the success with tanker drivers, Fonterra is rolling GoodYarn out further. “In 2018 we rolled it out across our Distribution Centres, which has inserted the workshop into its Safe People, Safe Food learning development programme."

Because the programme is designed to be peer-to-peer, Fonterra’s own people run the workshops. Terry says at the start they used the company’s health and wellbeing team as facilitators, but now have a wider group of non-health professional facilitators trained up.

“It’s about training our people for our people. We picked them for their ability to facilitate but also because they have good communication skills, good empathy and they’re authentic. They’re also natural leaders within the organisation and know how to support our people.

“The key is to think big but start small. GoodYarn has been one of those programmes we have been able to build from the ground up with the support of the GoodYarn team,” he says.

“We want as many people as possible to benefit from GoodYarn. At Fonterra we encourage people to bring their whole-selves to work, and we know if our people have good mental health they are likely to be thriving and enjoying their work.”

Since it was first rolled out in 2014, GoodYarn has been developed into a programme for all workplaces, helping people talk about mental health and wellbeing, and support those experiencing mental distress.

“GoodYarn is about helping people understand what mental health is and reducing the stigma around it,” says Terry, who is now on the Board of the Good Programmes Trust, which manages GoodYarn. “It also covers how to recognise common signs of mental distress, how to stay mentally well, and how to respond and help those who need further support.”

Whether held by a business or community organisation, the workshops are usually delivered in an informal setting. They have been run at staff rooms, rural organisations, conference rooms and community halls or similar. It’s peer-led, so non-health professionals – usually employees from the business – are trained via a two-day intensive workshop to facilitate the programme.

Not only is that more cost-effective than paying an external facilitator, Terry says participants respond better to people they know, and the expertise of the facilitator stays within the workforce, becoming someone people can connect with.

The workshop is backed up by a GoodYarn workbook, which is written by experts, but in plain language. It’s evidence and research-based to ensure the advice and information within is the best-practice approach to mental health promotion.

Winner of the 2016 Mental Health Services Award, as at mid-2019, GoodYarn has reached more than 7000 New Zealanders working in small and medium businesses, as well as some of the country’s largest. There are now 60 GoodYarn facilitators across 25 industries.

It’s run as charitable trust. Companies pay a fee for their people to be trained as facilitators, then a licence fee that covers the cost of the course materials, which can be personalised with an organisation’s own logo. For more about GoodYarn, see www.goodyarn.org.

This article first appeared as a case study on the Wellplace website.